Patricia Brannan "Trisha" Malik (born November 10, 1969) is the mother of the former member of One Direction, Zayn Malik.

Trisha Malik was born in Bradford to a white British working class family.

Her parents ran a pub in the city, but her life changed when she met and married a British Pakistani, Yaser, and converted to Islam.

"I've always tried to learn as much as I can about my husband's religion and culture," she says.

"I made sure the children went to the mosque. Zayn has read the Quran three times." while taking about her children's religion.

Life hasn't changed much in the Malik household, though. "I still shop in my local supermarket and go to the discount store for a pair of shoes," she says.

However, the family - Zayn's parents, three sisters and the family dog - have made one upgrade, moving to a new house in the city. Zayn paid for it himself and, in the recent One Direction movie, Trisha is seen, overcome with emotion, as she is handed the keys.

"We never had enough money to buy our own house," she explains. "We always lived in rented accommodation, so Zayn knew how very important it was for me to have my own place".

Trisha worked as a halal chef in the kitchen of a local primary school, making meals for Muslim children. On Zayn's advice she gave up her job. "Zayn said 'you don't have to do this anymore'. Instead, he puts my wage into my bank", says Trisha.

"None of the sisters will follow Zayn's footsteps into a music career," says Trisha, who describes her offspring as "shy". They don't get to see their brother often but, when they do, she says it's just like it used to be. "He'll tease his sisters, he'll hug them and they might have an argument like brothers and sisters do," she says. "He spoils the younger one."

"We have a great relationship, me and my mum," Zayn, told Us Weekly. "She's just a part of everything and she's really cool, man. I love my mum". Zayn spent some quality time with Trisha in between trips to the studio to record his upcoming sophomore solo album. "My mum's out with me at the minute, so I'm seeing her, enjoying the day," he told Us. "Then in the evenings, I'll come to the studio for a few hours if I've got a couple ideas."

The Asian Awards 2015 in London, England. 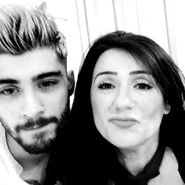 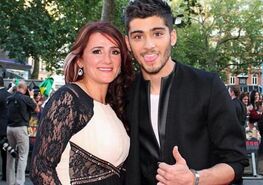 She, alongside her daughters and Zayn has also appeared in One Direction's 3D movie, This Is Us.

Retrieved from "https://zayn.fandom.com/wiki/Trisha_Malik?oldid=10111"
Community content is available under CC-BY-SA unless otherwise noted.