She began dating UK singer and former One Direction band member Zayn Malik in May 2012. The couple got engaged in August 2013 but broke up in August 2015.

She’s in a relationship with English professional footballer Alex Oxlade-Chamberlain since January 2017.

Perrie Louise Edwards, was born in the neighborhood of South Shields in Tyne and Wear, England, UK. Born to mother Debbie Duffie and father Alexander Edwards, she has an older brother, Jonnie. Her parents are both singers. Her dad Alex is in an unsigned band called Alexander’s Palace. Her mum Debbie was a singer. She didn’t have any singing ambitions until fairly recently. She said: "I thought I was just a normal singer. I did a few shows at school but was always at the back. I never had the confidence to do it well. Now, with these girls, everything is working." Before entering The X Factor, Perrie was planning to start a performing arts degree.

Perrie sang "You Oughta Know" by Alanis Morisette during her first audition in Glasgow and received praise from Kelly Rowland, who described her voice as “Crazy, yo!” Tulisa wasn’t as complimentary about Perrie’s audition saying that she liked her, but wasn’t madly in love with her. Louis didn’t “get” Perrie’s audition at all, prompting Kelly to ask Louis “what didn’t you get?”. She successfully passed to the other round. She failed to make it past bootcamp and, similar to previous seasons, was placed into a group with other rejected contestants. Perrie and Jesy were put into a two-member group named Faux Pas, but they failed to make it to the judges houses. Judge Kelly Rowland decided to put Faux Pas together with two other girls, Leigh-Anne and Jade Thirwall, to make a four piece band called Rhythmix instead, and put them though to the judges houses, then the live shows.

on The X Factor. On 26 October 2011, Rhythmix announced that they would change their name following a dispute with a Brighton-based children's music charity of the same name, after the programme tried to trademark "Rhythmix". A spokesman for The X Factor said, "At the request of the charity Rhythmix, the members of the girl group Rhythmix have decided to change their name, a decision which has the support of Syco and TalkbackTHAMES." It was reported that the group decided to make the change, with no legal requirement to do so, to avoid any difficulties for the charity. On 28 October 2011, it was announced that the group's new name would be "Little Mix".

On 11 December, Little Mix were announced as the winners, the first time a group had won the show.

Shortly after Little Mix won the eighth series of The X Factor, both Gary Barlow and Richard "Biff" Stannard were rumored to be writing songs for the group's debut studio album. On 25 January 2012, the group made an appearance at the National Television Awards, and performed the En Vogue song "Don't Let

Go (Love)". They also accompanied The X Factor judges Barlow and Tulisa Contostavlos on stage to receive the Best Talent Show award won by the programme. On 30 May 2012, the group announced through a live stream via Twitcam that their new single would be called "Wings", and a short snippet would premiere on Channel 4 that week after being played at their filming session for Alan Carr: Chatty Man. The group performed the single for the first time at the T4 on the Beach concert on 1 July 2012. On 17 September, the album's artwork was unveiled via the group's official Facebook page, which also confirmed that the album's second single, "DNA", would premiere on radio on 1 October and would be officially released on 12 November, a week prior to the release of the album. The album's track listing was revealed on 28 September 2012.

In an interview with Digital Spy in March 2013, Little Mix stated that they wanted their second album to have a more R&B sound. Band member Jesy Nelson added: "I personally want to put a lot more dancey stuff in there. As in, one of the songs that comes on in a club that makes you want to dance. Not that David Guetta sound, but more R&B – a bit like Eve and Gwen Stefani's "Let Me Blow Ya Mind". They also revealed that they would be starting to write material for the new album in the coming months. On 19 September

Little Mix held a livestream to announce that they had finished recording their second album and it was going to be sent to be mixed. In the same livestream the girls announced that the first single "Move" would be premiered on radio on September 23. They also sang an acapella of a song that would become "Little Me". On 4 October, Little Mix uploaded a video to their official YouTube page, announcing that their second album would be called Salute and would be available for pre-order on 7 October. The album was released in the UK on 11 November 2013 and released in the US on 4 February 2014.

At the 2015 Brit Awards, Little Mix confirmed that their album was completed, describing it as having a "whole new sound" and projecting the release for sometime in 2015. In May 2015, having written over 100 songs for their third album, they released "Black Magic", the lead single from their third album. They also co-wrote Britney Spears and Iggy Azalea's single "Pretty Girls", which was released in May 2015. The group stated that the album had more of a pop sound than their previous album Salute, an R&B-style album, with the songs being very fun, colourful and personality driven.

On 15 July 2015, the group officially announced on Twitter that their third studio album would be titled Get Weird, and would be available for pre-order the next day. Shortly before the album's release, it was revealed that they were forced to change some of the lyrical content on some of their songs, namely "Love Me Like You" and "A.D.I.D.A.S.", both of which contain sexual themes.

Little Mix released their fourth album, Glory Days, on October 18, 2016. The lead single, Shout Out To My Ex, was a UK #1 hit and a top 5 worldwide hit. The single remained at number one in the UK for three consecutive weeks. On December 5, 2016 Little Mix announced "Touch" as the second single from the album. It would go on to peak at #4 in the UK. On March 1, 2017 the group announced "No More Sad Songs" as the third single on March 3, 2017. The single release features American rapper Machine Gun Kelly. The single peaked at #16 on the official UK charts. On May 26, Little Mix released "Power" as their fourth single, with UK grime rapper Stormzy featuring. It became a UK top ten hit.

Perrie dated Zayn Malik from 2012 to 2015. He proposed in 2013 and they were engaged until their 2015 split. The two met on The X Factor in 2011 whilst Perrie was competing and One Direction were guest performers. Zayn first tweeted about Little Mix by showing support for them on November 19, 2011. By December, media heavily speculated Zayn and Perrie had begun dating. However, Perrie initially denied reports weeks later, responding to claims she dumped him with "How can I dump someone I barely know?".

In April 2012, Zayn tweeted Perrie for the first time, saying "Tonight was fun, let's do it again sometime ;) xx". They were photographed kissing the following month. In August 2012, Perrie celebrated EID with Zayn and his family. Cheating rumors rose during August and September 2012, but all appeared well in November, as the couple bought their first puppy together. They spent Christmas and New Years Eve together with Zayn's family.

In January 2013, photographs of Zayn asleep in bed were leaked online by a waitress claiming to have slept with him. The claims were never confirmed or denied and 'Zerrie' continued dating. They celebrated their first anniversary in Paris in April 2013. In June, Zayn and Perrie got matching tattoos and Zayn got an arm tattoo of a woman wearing a beanie, which he confirmed as Perrie a few months later.

Zayn and Perrie's engagement was confirmed on August 20, 2013, at the premiere of One Direction's This Is Us documentary film. In February 2015, Zayn was embroiled in another cheating scandal when pictures of him holding hands and hugging a woman surfaced online. Zayn tweeted angrily about the accusations saying "I love a girl named Perrie Edwards". He was signed off from One Direction's On the Road Again Tour the next day and exited One Direction permanently a week later. All appeared well between Zayn and Perrie through to June, where a video of Perrie referring to herself as "Perrie Malik" was released.

On August 4, 2015, Perrie confirmed to E! News that she and Zayn had split up. Media reported he had broken up with her via text message, but Zayn denied these claims to Fader Magazine in November stating “ I have more respect for Perrie than to end anything over text message. I love her a lot, and I always will, and I would never end our relationship over four years like that. She knows that, I know that, and the public should know that as well. I don't want to explain why or what I did, I just want the public to know I didn't do that.". Perrie also denied Little Mix's song Hair was written about Zayn, as writing took place before they split up. Little Mix continued an amicable relationship with One Direction. In November 2016 Zayn released an autobiography where he also spoke about the relationship: “It was March 2015. I had been in a bad place for a while and I didn’t see myself getting out of it unless I made a change. My relationship with my fiancée, Perrie, was breaking down. To make matters worse, there were so many crazy stories flying around in the newspapers about us, and it felt like such an invasion of privacy, it made me just want to disappear for a while.”

In 2016, Little Mix released "Shout Out To My Ex" a song depicting the recovery process after a bad breakup. The lyrics mention "thank you for the tattoos" and "it took four long years to call it quits", leading media outlets to report the song was partially about Zayn. The music video depicts the band throwing various items from their car, including a teddy bear holding a love heart, which was a gift Perrie received from Zayn. In late 2016, Zayn covered his arm tattoo of Perrie. On July 30, 2017, During Little Mix's Glory Days tour in Auckland, New Zealand, While performing on that song, Perrie sung the verse "Hope she ain’t fakin’ it like Hadid" instead of "Hope she ain’t fakin’ it like I did" (that referenced Zayn's Next relationship Gigi Hadid) which prompted Jade Thirlwall(Her fellow band member) to laugh uncontrollably.

She is currently in a relationship with football player, Alex Oxlade-Chamberlain. 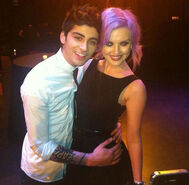 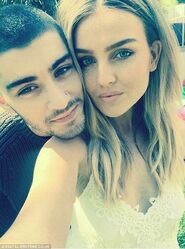 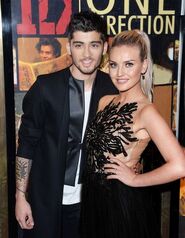 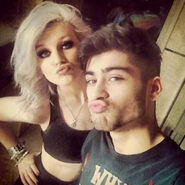 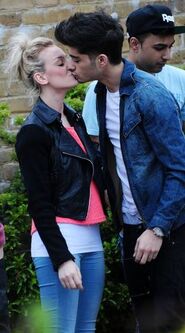 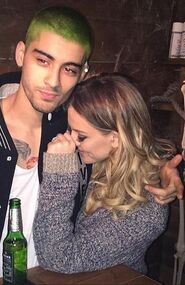 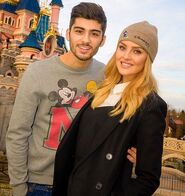 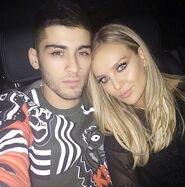 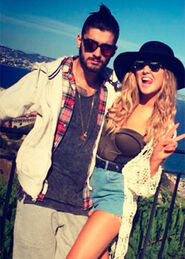 Add a photo to this gallery
Retrieved from "https://zayn.fandom.com/wiki/Perrie_Edwards?oldid=9786"
Community content is available under CC-BY-SA unless otherwise noted.