Ocean's Eight (stylized as Ocean's 8) is an upcoming American heist comedy film directed by Gary Ross and written by Ross and Olivia Milch. It is both a sequel and female spin-off of the Ocean's Trilogy, and will be released on June 8, 2018, by Warner Bros. Pictures. Principal photography on the film began on October 25, 2016, in New York City.

British singer-songwriter, Zayn Malik, will have a cameo in this film.

The British singer/songwriter, and former member of One Direction, was first seen teaming a white tuxedo jacket with a dress shirt, fitted black trousers and a pair of patent black Oxfords.

Wearing his short locks in a side-swept fringe, Malik also kept a rugged edge to his look by allowing a dusting of stubble to coat his cheeks and jaw. 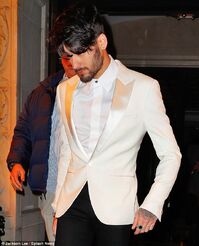 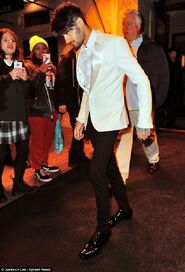 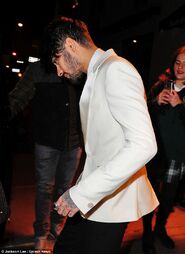 Add a photo to this gallery
Retrieved from "https://zayn.fandom.com/wiki/Ocean%27s_Eight?oldid=7032"
Community content is available under CC-BY-SA unless otherwise noted.