iCarly is an American teen sitcom that ran on Nickelodeon from September 8, 2007 until November 23, 2012. One Direction has guest starred and performed once on the show.

The series, created by Dan Schneider, focuses on teenager Carly Shay, who creates her own web show called iCarly with her best friends Kayla Lee, Sam Puckett and Freddie Benson. The show stars Miranda Cosgrove as Carly, Kayla Marie Lee as Kayla, Jennette McCurdy as Sam, Nathan Kress as Freddie, Jerry Trainor as Spencer, and Noah Munck as Gibby, and was taped at Nickelodeon on Sunset (season 1–5) and KTLA Studios (Season 6–7) in Hollywood, California.

The show was nominated for an Emmy award for Outstanding Children's Program five times. The series finale, "iGoodbye", aired on November 23, 2012.

After a vacation to Mexico, Carly gets a sickness called “Jungle Worms”. Although, she is cured of her symptoms after two days, Dr. Dresdin warns that she might still be contagious. Carly has her own separate water bottle so she won't get anyone sick. When the British-Irish boyband One Direction accepts an invitation to iCarly, band member Harry gets sick after he drinks from Carly's water bottle. He's still not better after a week and Carly takes care of him. At the Groovy Smoothie, the others are wondering why Harry isn't better after a week. Sam tell the others how Harry is better but just faking his illness because he likes Carly taking care of him. In order to get him to confess, they make up a lie that they want to accept Gibby, a huge One Direction fan, into the band. Harry is so shocked by the idea that he stops pretending to be sick, and One Direction performs their song "What Makes You Beautiful" on iCarly.

Meanwhile, Spencer finds an exercise machine on the junkyard. It catches the eye of an attractive woman named Justine, so Spencer claims to be a personal trainer in order to impress her. Unfortunately for him, she doesn't want to train, but rather sends her bratty daughter Bethany. Spencer eventually talks to the girl about how she has to be nicer and tries to give her a makeover, but fails.

After the song, Sam kidnaps Zayn and pushes him into the elevator. 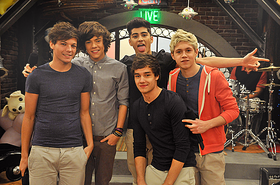 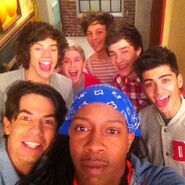 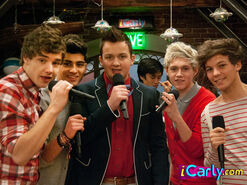 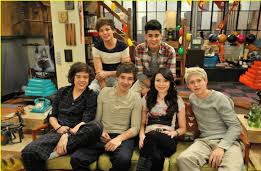 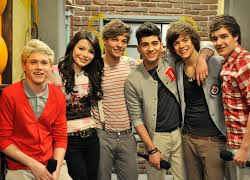 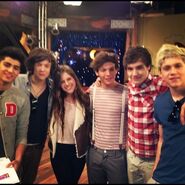 Add a photo to this gallery
Retrieved from "https://zayn.fandom.com/wiki/ICarly?oldid=5455"
Community content is available under CC-BY-SA unless otherwise noted.