She was named one of the 12 rookies in Sports Illustrated's annual swimsuit issue in 2014. She has also appeared on the reality TV series, The Real Housewives of Beverly Hills, in which her mother Yolanda Hadid has starred since season 3 in 2012. In November 2014, she made her debut in the Top 50 Models ranking on models.com.

In 2016, she was named "International Model of the Year" by the British Fashion Council.

Former One Direction member, Zayn Malik and Hadid began dating each other in December 2015. The couple parted their ways on March 13, 2018, but were seen together kissing in April 2018 and since have been confirmed to be back together

Gigi Hadid was born and raised in Los Angeles to real-estate developer Mohamed Hadid and former model Yolanda Hadid. Her mother is a Dutch-born American, and her father is Palestinian-American. She has two younger siblings, Bella, who is also a model, and a brother, Anwar. She has two older half-sisters, Marielle and Alana, on her father's side. Following her parents' divorce, her mother is married to Canadian music producer David Foster, through whom she has five stepsisters. In 2013, Hadid graduated from Malibu High School, where she was captain of the varsity volleyball team as well as a competitive horseback rider.

Following high school, she moved to New York City to focus on her studies and modeling career. She studied at The New School beginning fall 2013.

Hadid's modelling career started when she was two years old after she was discovered by Paul Marciano, of Guess. She signed with IMG Models in 2011. She was named the face of a Guess campaign in 2012.

Hadid played Australian singer Cody Simpson's love interest in the video for his song "Surfboard" which was released on April 14, 2014. She played the love interest of singer Miguel in the music video for "Simplethings", released May 29, 2014. In January 2015, she was named the Daily Front Row's "Model of the Year" and was named a Maybelline brand ambassador. By May 2015, Hadid had walked for designers including Marc Jacobs, Chanel, Michael Kors, Jean Paul Gaultier, and Max Mara. In December 2015, she made her first appearance in the Victoria's Secret Fashion Show. In 2016, she has walked for Versace, Chanel, Elie Saab, Anna Sui, Miu Miu, Balmain, Diane Von Furstenberg, Tommy Hilfiger, Fenty x Puma and Giambattista Valli. She appeared in campaigns and runway promotions for the movie Zoolander 2. Hadid also appeared in ad campaigns for Versace, Balmain, Max Mara, Stuart Weitzman, Topshop, Tom Ford and Seafolly. In May 2016, Hadid was revealed as the new face of the Philippine-based international casual wear brand Penshoppe. She co-designed three capsule collection with Tommy Hilfiger called Gigi by Tommy Hilfiger.

In addition, she became the global brand ambassador for Tommy Hilfiger, fronting campaigns for underwear, apparel and fragrances. Hadid starred in an interactive campaign including a commercial for the BMW M2. For the 2016 Fashion Week in New York, Milan and Paris, Hadid opened five shows and closed seven. She hosted the 2016 iHeartRadio Much Music Video Awards in Toronto on June 19, 2016. In the fall of 2016, she designed a boot collection for Stuart Weitzman titled the Gigi Boot. Hadid became the brand ambassador for Reebok, fronting their #PerfectNever campaign.

On November 20, 2016, Hadid hosted the American Music Awards, along with former Saturday Night Live cast member Jay Pharoah. In December 2016, she made her second appearance on the Victoria's Secret Fashion Show, earning her "wings" for the first time.

Also in December 2016, she won the award for International Model of the Year at the British Fashion Awards, with the award presented to her by Donatella Versace.

In 2016, Hadid starred in an interactive campaign including a commercial for the BMW M2. Hadid starred in Calvin Harris' music video "How Deep Is Your Love", which was released on August 6, 2015. She also co-directed the video for DNCE's "Cake by the Ocean". She starred in Zayn's music video for "Pillowtalk" in January 2016. She hosted the 2016 iHeartRadio Much Music Video Awards in Toronto on June 19, 2016.

In 2017, she’s been on the cover of the first-ever issue of Vogue Arabia. She collaborated with Vogue Eyewear and designed a collection. Hadid also collaborated with Stuart Weitzman which raised money to build schools in Ghana, Guatemala and Laos. She’s won the “Woman of the Year” at the Glamour WOTY 2017. Gigi walked (and closed) the Versace SS18 Tribute show to Gianni Versace. Gigi’s Harper Bazaar cover & Vogue Arabia cover were projected on the Empire State Building and on the walls of the Museum of Islamic Art in Doha.

Hadid and Zayn Malik went public with their relationship in November 2015. They first stepped out as a couple at an American Music Awards afterparty, and began posting pictures together on Instagram in December 2015. In January 2016, they searched for an apartment together in New York and Hadid appeared in the music video for Zayn's debut single, Pillowtalk. In February, Zayn confirmed they were a couple. In April, they appeared in a VOGUE Italia photoshoot and in May they attended the MET Gala together.

Zayn accompanied Gigi to various New York and London Fashion Week events during September 2016, where he also met with legendary designer Donatella Versace. On November 20, Zayn and Gigi both attended the 2016 American Music Awards, where they shared a backstage kiss after Zayn won "Best New Artist".

In the September issue of UK Elle Magazine (released in late July 2016), Zayn spoke about dating Gigi saying "She's super intelligent, I think that's why it works so well. And we do the same type of job so we get that with each other."[1]

In the November 2016 issue of Evening Standard Magazine, Zayn stated he and Gigi did not own a home together, saying "We haven’t officially swapped keys or anything yet, we live together wherever we are.’ He described her as "a very intelligent woman. She knows how to carry herself. She’s quite classy and that. She’s not, like, arrogant in any way, she’s confident. She carries it well. She’s cool.’[2]

On June 13, Gigi wrote a letter of support to Zayn on her Twitter, after he canceled his Summertime Ball performance due to "the worst anxiety of [his] career".[3][4] The couple collaborated together on Zayn's Versace Versus clothing line promotions, filming a series of Q&A videos released in March 2017.

In mid-April 2018, Malik was seen leaving the apartment of Hadid. Later on, the couple were seen together in the streets kissing and it went unconfirmed whether they ere back or not. Consequently, it has been confirmed that they are back together after the short split.

On June 2, it was originally confirmed by People Magazine that Zayn and Gigi had split up after seven months dating[7]. However on June 3, 2016, Gigi posted a video of her singing "Pillowtalk"[8] on Snapchat. On June 6, Gigi's father, Mohammad Hadid stated "I think they are probably still together". 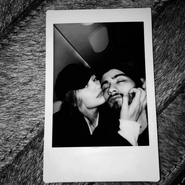 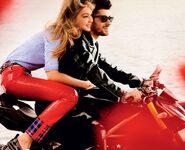 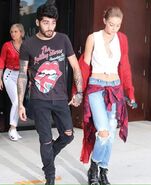 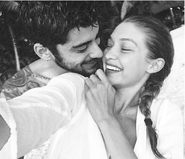 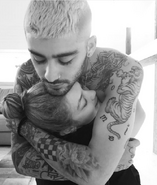 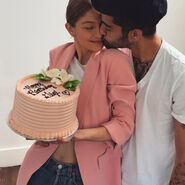 Retrieved from "https://zayn.fandom.com/wiki/Gigi_Hadid?oldid=10229"
Community content is available under CC-BY-SA unless otherwise noted.