The album had two singles, "Steal My Girl" and "Night Changes", both reaching platinum status in the US.

On April 27, 2014, it was confirmed that One Direction were working on their fourth studio album. Writing for the album primarily took place during the Where We Are Tour, and recording sometimes took place in the hotels the band were staying at between concerts.

Louis Tomlinson and Liam Payne worked on the majority of the album with songwriters Julian Bunetta, John Ryan, and Jamie Scott. Members Harry Styles and Zayn Malik also co-wrote tracks with Bunetta, Ryan, Scott and producer Johan Carlson. Niall Horan was unable to be involved in writing due to a leg injury.

Niall stated in one interview that he recorded his verse for "Clouds" in a bus. Malik has described the album as a way of growing with their fans, and having more mature lyrics without straying from their style too much. The album provides a place for each member to showcase their styles of writing.

The name and cover of the album were announced on September 08 on One Direction's official website, along with a free download of a song called "Fireproof", which was available for 24 hours.[2] Horan stated that the reason for the free download was "because you have supported us so much, we wanted to give a little something back".[3] "Fireproof" was written by Payne and Tomlinson along with John Ryan, Jamie Scott and Julian Bunetta, who also wrote their single "Story of My Life". In the 24-hour span, 1.1 million downloads were generated.[4]

One of the songs for the album, titled "18", is written by Ed Sheeran, who also wrote "Little Things" and "Moments" for the group. Horan came up with the name of the album, commemorating the fact that it is the band's fourth album and that it has been four years since their formation. 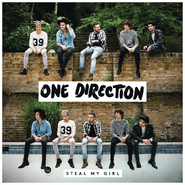 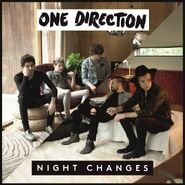 "Night Changes"
Add a photo to this gallery

There were five promotional singles released on five different days.

The On the Road Again Tour was announced on the morning program Today, where the band gave a pre-recorded interview releasing the details of their return to Australia. It was later announced that the band would also be touring Asia and Africa. The group will be making debuts for some countries, particularly in the United Arab Emirates.

On October 24, 2014, the official One Direction site announced several more tour dates, with shows across Europe, the US, and Canada. 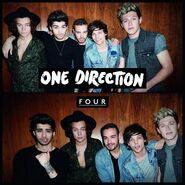 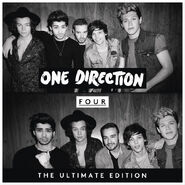 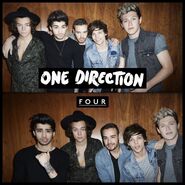 Japanese Edition
Add a photo to this gallery

The album quickly rose to the top of the UK Albums Chart, with 142,000 copies sold during its first week. The album scored One Direction their third consecutive number one album. Based on UK sales, it was certified Gold by the BPI in its first week, and certified Platinum in its fourth week.

The deluxe edition of Four became the top charted album on iTunes in some 67 countries. In the US, the album debuted at No. 1 on the Billboard 200 chart on the week, with sales of 387,000. One Direction thus became the first musical group to have each of their first four studio albums debut at No. 1. One Direction follows three solo artists who have attained No. 1 status with their first four albums: Britney Spears, DMX, and Beyoncé. Four sold 814,000 copies in the US in 2014, the ninth best-selling album of the year. The album reached its millionth sales mark in the U.S. in August 2015, and has sold 1,016,000 as of October 2015.

Four received generally positive reviews from music critics. Some argued that the members' songwriting showed signs of maturity, while others claimed the musical content was too similar to the band's previous work.

AllMusic's review said it was the group's "fourth well-crafted, packed-with-great-pop-songs album in a row", although did cynically point out the pattern of each of said albums being released just in time for "optimal holiday-season gift-giving". Tshepo Mokoena of The Guardian gave the album a more mixed review of three-stars, drawing comparisons with Springsteen but with the caveat of being "hardly groundbreaking pop", and Jim Faber of the New York Daily News also gave three stars and praised the group for "confronting their limitations" but at the same time questioned why whilst doing so they spent "so much time looking back with longing", pointed out an apparent "anxiety" and expressed disappointment that whilst Four represents a step forward in their history, it "represents a step back in both sound and sensibility".

Jessica Goodman and Ryan Kistobak of The Huffington Post included the album on their list of 2014's best releases, claiming that "2014 will forever be known as the year that we realized One Direction was actually, dare we say, good." Goodman further complimented the album as a "complex, feel-good trip down young love lane".

Retrieved from "https://zayn.fandom.com/wiki/Four?oldid=8389"
Community content is available under CC-BY-SA unless otherwise noted.